Behind the wall of secrecy: Escape from Camp 14

The Indiana Right to Life Political Action Committee is calling on Senator Richard Lugar's campaign to stop misleading Hoosier voters by stating that he has a "100% record" with National Right to Life, a claim that has appeared consistently in Lugar campaign communications.

"The Lugar campaign's claim is clearly designed to give the impression that he has never voted against National Right to Life, but his lifetime voting record tells another story," states Indiana Right to Life PAC chairman Mike Fichter. "The truth is that Senator Lugar has voted against National Right to Life on numerous occasions by voting for federal funding for embryo-killing research, voting for restrictions on the free speech rights of organizations like Right to Life, and voting against restrictions on the use of tissue from aborted babies."

"It is true that Senator Lugar can point to individual sessions in which he voted in alignment with National Right to Life, but when most people hear a candidate refer to a rating, the general impression is that the reference is to a lifetime rating," says Fichter. "We believe Senator Lugar should be up front with voters in acknowledging that he has voted against Right to Life on some very high profile issues."

Indiana Right to Life is a state affiliate of the National Right to Life Committee. Senator Lugar's complete voting record can be found at www.nrlc.org. 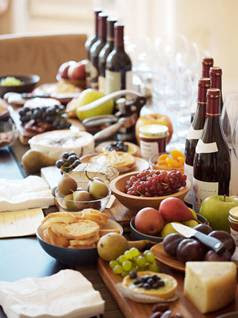 Happy Birthday Senator Lugar (from your progressive friends in Virginia) 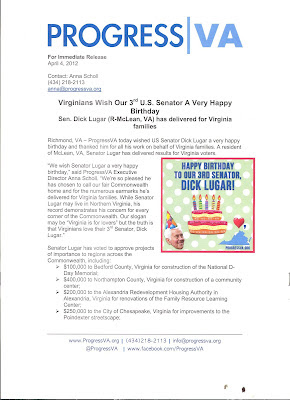 ProgressVA today wished US Senator Dick Lugar a very happy birthday and thank him for all his work on behalf of Virginia families. (funny, I thought he worked for us!)..

"We're so pleased he as chosen to call our fair Commonwealth home and for the numerous earmarks he's delivered for Virginia families. While Senator Lugar may live in Northern Virginia, his record demonstrates his concern for everyt corner of the Commonwealth. Our slogan may be 'Virginia is for lovers' but the truth is that Virginians love their 3rd Senator, Dick Lugar".

The conservatives in Indiana pay for Senator Lugar, but he works for the progressives where he lives...in Virginia.