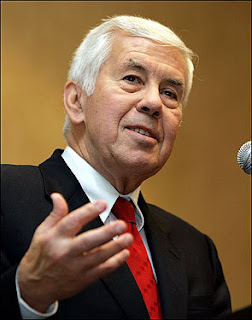 Lugar story is ignored by media 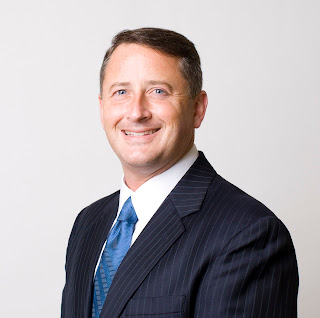 Shame on Indy's mainstream media. While the Superbowl is a big story and Indy is raising the bar for future sportingevents, that does not mean Indiana's residents are undeserving of proper due diligence regarding the issue of Lugar's legal residency. While Indy's journalists witch hunt and examine everty detail of Charlie White's alleged infractions, the Lugar elephant remains ignored by them. It reminds me of how the media often goes out of their way to ignore Ron Paul.

It is reprehensible that this story, widely covered on statewide independent blogs, is not in the IBJ, Indy Star, or any of our news channels. All of them should be ashamed to see that The Daily Caller beat them to the punch.

I'm not sure what's worse. A sitting senator who acts above the law or our journalists who ignore the story.

You have before you a choice in the pivotal year of 2012. Your choice includes the choice to learn everything you can about Ron Paul.

An excellent place to start is the site independent of Dr. Paul's campaign, The Daily Paul.

Dr. Paul is concentrating on getting delegates from the remaining caucus states, which may prove to be a great strategy since Gingrich does not have Virginia ballot access.

Mittens remains attractive and likable, albeit compromised by past transactions.

Obama, nor his lawyers, made an appearance in court today. Here is InfoWars and Atlanta GA news coverage. His failure to appear could mean that Obama is denied Georgia ballot access.

But would he take Gingrich or Mittens over Dr. Paul?

While Ron Paul was mostly ignored during the debate, here are the highlights from the only principled person on the stage.

I make no bones about it, I trust President Obama to take better care our country more than I would Newt Gingrich. There is something sinister and fundamentally untrustworthy about Gingrich.

If you want to learn more, tune into ABC Indy Channel 6 tonight at 11:30 pm to watch the Nightline interview with Marianne Gingrich. She says he is not fit to be president. I can't wait to hear what she has to say, for I believe she is going to confirm some things my intuition screams is nasty at the core of this man.

Be an Indiana delegate for Ron Paul

If you wish to be a delegate for Ron Paul, please submit your information and their delegate coordinator will contact you. The campaign may not call you immediately, as they are working their way through the states with earlier deadlines first. I understand that the basic requirement is that you pulled a republican ballot in the last primary. You do not have to be a member of the republican party.

Care to hear another Republican insider say that Mittens is the only Republican that can beat Obama? Because it simply is not true.

Mittens isn't even a conservative. He's a likable guy, but do you really want a corporate raider placed in charge of our military? Really? 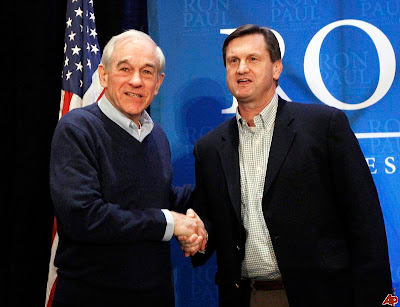 Statement from Sen. Tom Davis
“It’s easy to campaign on lower taxes, less spending and fewer regulations – it’s another thing entirely to stand up for these limited government principles when the entire Washington establishment is aligned against you. Yet for more than three decades Ron Paul has cast thousands of lonely votes in our nation’s capital based on the constitutional principles that this country was founded on – and that the Republican Party has promised to protect. Yet while generations of politicians – including far too many Republicans – were losing their way or caving to the status quo, Ron Paul was standing as a Tea Party of one against a towering wave of red ink.

“2012 marks the fifth consecutive year in which the federal government is going to spend well over $1 trillion in money it doesn’t have. Each and every American taxpayer is now on the hook for $135,000 worth of federal debt – and last year’s debt deal adds another $7 trillion in deficit spending over the coming decade. Meanwhile the U.S. Senate hasn’t passed a budget in nearly 1,000 days.

“I’m endorsing Ron Paul because enough is enough. Despite this wave of unprecedented government spending, our unemployment rate has remained above 8 percent for the last 34 months and 146.4 million Americans – one out of every two people in this country – are now classified as poor or low-income.

“Government activism and government intervention clearly hasn’t fixed our economy – which is why the Republican Party needs a nominee who isn’t wedded to that failed approach. We won’t chart a path to fiscal solvency or victory in November by running toward the failed ideas of the left – we will achieve those victories by returning to the principles that the Republican Party once stood for.

“That is why I am proud to endorse Ron Paul for president.

“Ron Paul’s record matches his rhetoric, his fiscal plan matches the fiscal challenges that our nation is facing and his movement represents the taxpayers whose interests have been ignored in the political process for far too long.

“I’m also endorsing him because unlike what the pundits have led you to believe, he is the candidate who gives the Republican Party the best chance to beat Barack Obama in November."

“We have a choice: We can keep electing candidates who talk about change only during political campaigns as a way to get elected, or we can finally elect a candidate who will walk the walk and make that change a reality – restoring our bottom line, our individual liberties and our national pride in the process.” 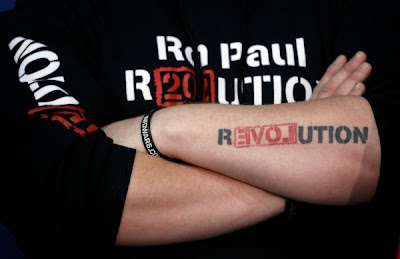 When Mitt Romney Came to Town

Mittens is a likable guy.

But is Romney is the guy to beat Obama? That's what an audience at the Iowa Caucus I attended was told by a Republican operative who helped lead the gathering in the small town of Durant, Iowa. He loudly stated that the only thing that mattered in this election was voting for the only guy who could beat Obama.

The only guy who can beat Obama? Really? Then why do some polls say any Republican could beat Obama?

Watch this film called "When Mitt Romney Came To Town" and ask yourself if you really want him to lead America, and more importantly command our armed forces? Do you think we'll have more crony capitalism with Romney or less?

Here is the link to the film, "When Mitt Romney Came to Town". 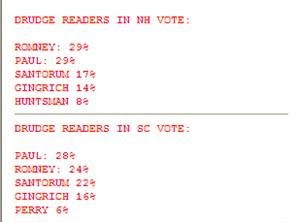 Matt Drudge does not engage in presstitution like the MSM does. That could also explain why he gets more viewers every day than they do.

"AND I WENT" Photo is going viral 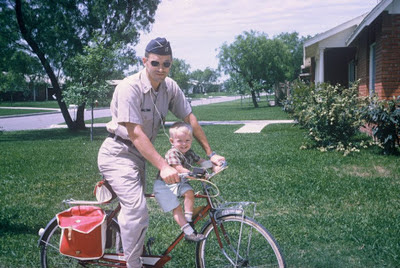 This vintage photo of Dr. Ron Paul and his son Rand (1960) is going viral since it was posted recently by Dr. Paul's daughter.
The photo is a response to war monger Newt Gingrich's assertion that he wasn't a draft dodger but had a wife and child. After Newt defended his cowardly actions in the recent debate, Ron Paul exclaimed that he had a wife and two kids and he went!

Ron Paul gets more military donations than all the other candidates (including Obama) combined. For someone that has the "kooky" foreign policy of obeying the Constitution, can someone explain why Ron Paul gets more financial support from real soldiers who are in the actual overseas theaters of war?

Perhaps poison excreting salamanders like Newt would have a different impression of war, if indeed they actually ever went to one. Americans are getting fed up with cowards like Newt who choose the safety of stateside, yet have no problem sending our troops to other countries to slaughter and be slaughtered in the name of Peace and Freedom.
Ron Paul is THE only anti-war candidate and the only one you can trust. He is the candidate our troops trust. 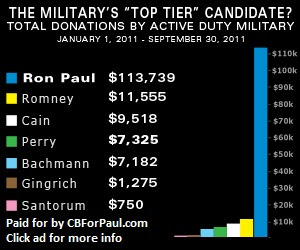 According to ABC, a woman in New Hampshire, who believes gay marriage to be 'unnatural', asked Ron Paul his opinion on gay marriage as he tried to have breakfast this morning. He simply answered the government ought to stay out of it because they screw everything up.

He then offered, “The important thing is how they live and what examples they set.”

What a great common sense answer that offers a resolution of peace over the issue.

How Iceland Bashed the Banksters and Won Their Freedom

This was part of a newsletter I received today from Bernard von NotHaus who is in prison for minting the silver Liberty Dollar and is awaiting sentencing :

As one European country after another fails or risks failing, imperiling the Euro, with repercussions for the entire world, the last thing the powers that be want is for Iceland to become an example.

Very succinctly: When Iceland stumbled into the huge debt hole created by their three big banks who tried to hold the citizens responsible for their monetary crimes of gross thief that would have bankrupt Iceland, the people revolted and refused to be held responsible for the banksters crimes. Just before the monetary criminals were to be arrested, they fled the country and Iceland sidestepped becoming another Greece.

This is a must read article because this is what America should have done with its current batch of monetary criminals in Washington and New York!

A second article describes how protests and riots eventually forced the government to resign. In the March 2010 referendum, 93% voted against repayment of the debt. But Icelanders didn't stop there: they decided to draft a new constitution that would free the country from the exaggerated power of international finance and virtual money.

Today, Iceland is recovering from its financial collapse in ways just the opposite of those generally considered unavoidable. The people of Greece have been told that the privatization of their public sector is the only solution. And those of Italy, Spain and Portugal are facing the same threat. They should look to Iceland. Refusing to bow to foreign interests, that small country stated loud and clearly that the people are sovereign!

Click HERE for Iceland Should Be in the News, But Is Not

In the beginning of this video tribute to Ron Paul's grassroots supporters, Hillary gives him props! 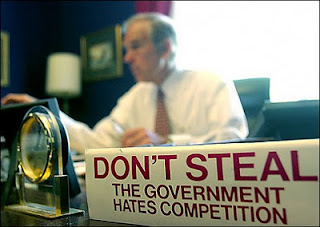 Gannett has no idea of the grassroots that is descending on Iowa as we speak.