Abby, I am tired of them too, honey.

GARY JOHNSON Be The 5 Percent

Break the two-party stranglehold on our country.  5% of the vote means ballot access and debate access for national third party candidates going forward.

By voting for the lesser evil (Obama or Romney), you will wind up getting evil.  The Patriot Act, NDAA, endless banker bailouts and wars will continue as usual for America.  Is that what you want?

Break the pattern, get out of the rut that has landed America here and make your vote truly matter for the future of our country.

I rented this vacation house for next year's trip to Outer Banks.  It was pounded by Sandy.  The realty company reported one house in Rodanthe, near this one, collapsed into the ocean. 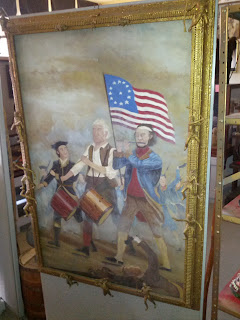 Yes, those are Revolutionary toy soldiers glued to the frame and painted gold.  Click the image to see magnified detail of this incredible early 20th century folk art find.

Indiana Stone Head Artifact (or what I gave up) 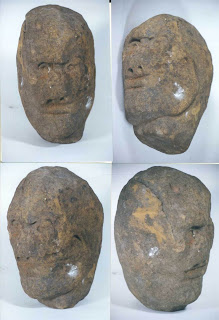 The sandstone head artifact was plowed during the clearing of a 10,000-acre ancestral farm estate near the tiny town of Carlos in Randolph County Indiana. The great-grandfather of the farm's current owner discovered the artifact. Until 1999, the stone head remained in the basement of one of the farm estate's seven homes. I acquired the artifact in 1999 and researched it. The artifact is 10.5" in height and 6" wide. It is relative in size to a human head and in weight to a bowling ball.

For many generations, this artifact remained in the the possession of the family who originally homesteaded the property where the artifact was found. I am the second owner of the artifact. Every expert I contacted indicated that they are unaware of any stone effigy of its size (life sized) that has been found anywhere in North America.

My research concludes that the artifact was most likely carved by pre-civil war African American who escaped via the Underground Railroad, as the object was found very close to the Levi Coffin home in Newport (Fountain City, Indiana) . Coffin, a Quaker, was often called "The President of the Underground Railroad". Together, with his wife, they helped more than 2,000 slaves escape to freedom in the North.

Rick Jones, State Archaeologist
Jim Mohow, Archeologist
Indiana Department of Natural Resources
Historic Preservation & Archeology
The object was presented to the state archeologist's office in July 1999. Both archaeologists who examined the artifact confirmed that the oxidation present is at least 100 years and could possibly be hundreds of years old. In addition the archaeologists were able to confirm that the head was carved from sandstone rock deposited in the Randolph County Indiana area and was carved using stone instruments. Based on their knowledge of found or excavated artifacts in Indiana, they were unable to identify any similar effigies from the eastern United States, nor were they able to confirm who may have carved the artifact. They offered that the artifact might have been carved by a 19th century Randolph County settler, and if so would be considered a rare primitive, as wood, rather than stone, was the favorite medium for carvers of that time. They agreed that the object was quite rare and suggested it be kept in a secure location and that the object be presented to the Glen Black lab in Bloomington and the Indianapolis Museum of Art and an appraisal be obtained.

Bob McCullough, Archaeologist
Glen Black Laboratory of Archeology at Indiana University, Bloomington, IN
The object was presented to Mr. McCullough in July 1999. he was unaware of any other sandstone head unearthed anywhere in Indiana. he indicated in pre-civil war Randolph County there was a large African American population who arrived via the Underground Railroad settlement, as it was found near the Levi Coffin home near Richmond Indiana. He felt strongly that the object was carved by a member of that community in the style of the traditional arts and crafts.

Ted Celenko, Curator of African South Pacific and Pre-Columbian Art
Indianapolis Museum of Art, Indianapolis, IN
Photographs and research summary were submitted by mail to the museum. Mr. Celenko telephone me with his remarks. he stated that he was unaware of any similar sandstone artifacts. he offered that the object's nose and brow had suffered quite a bit of damage and was probably sculpted more finely that it appears today. He had no judgment for the age of the object or who may have made it.

Ray Gonyea, Associate Curator for Native American Affairs
Eiteljorg Museum of American Indians & Western Art, Indianapolis, IN
the object was presented to the Eiteljorg Museum in September 1999. Mr. Goneya believed that the object could be Native American, as there is evidence it may have been sculpted with tools characteristic of Native Americans. he stated that the nose was probably drilled with a pointed flint tool (confirming the Indiana State Archaeologists opinion it was made with stone tools) and the eyes were carved with an unusual reed tool. The reed tool was used by pouring sand and water through the opening of the hollow reed and rotating the reed between the sculptor's hands thus utilizing the sand, water, and friction to carve. In addition he felt certain that the scrapes present on the right side of the object were plow marks, as there is no oxidation there and the scrapes are indicative of those made from a heavy plow. he asked if the object was for sale and kept photos to show the other staff of the museum who were unavailable that morning. He also mentioned that possibly a similar stone effigy exists in Buffalo Museum of Science in New York. Subsequently, I was unable to find a similar object in the Buffalo Museum.

The accompanying photographs were taken immediately upon my acquisition of the artifact in 1999. The white smudges are plaster dust from the basement where the object was kept during for several decades. The plaster and dust on the object was brushed away using a soft brush. No other attempt to clean the object has been made. 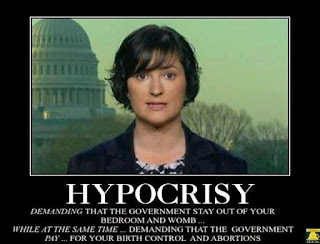 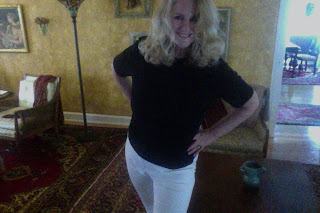 Fans of Garrison:  You know he is NEVER wrong about anything to do with conservatism.

For the rest of you...Did you know that Martin Sheen, Ed Asner, and Woody Harrelson collaborated on a 9/11 Truther movie about supposed errors within the official story?

We all know our Government does not lie to us.  There are never ever (in a million years) covert or black budget missions going on among top level people in government.  In fact, there is no black budget.  It is a conspiracy theory or myth at best.

The CIA does not run drugs or guns and never has. Monsanto's Agent Orange was and is completely safe just like the GMO's they patent today and don't label.

Those TSA scanner terrahertz waves are nothing to worry about and do not tear apart human DNA.  Pay no attention to that MIT Technology Review report.

I am comforted at night because most of all,  I know our government would never orchestrate a false flag or foolishly risk the lives of Americans.

My plan is to watch this ridiculous 9/11 Truther movie and laugh.  Then I plan to have a great time making fun of stupid Truthers like Martin, Ed, and Woody.  They should be exiled from Hollyweird as punishment for their affront to Americans.

In the first part of this interview with Alex Jones, Lyndsey Williams lays out the plan as he was told for the monthly $40 billion QEIII bailout money.  The bankers are using the fiat to buy up every mortgage in America and leverage the mortgages into derivatives (again).  You have got to listen to this explosive interview which also discusses Williams' predictions which have mostly come to pass in the exact timeline he laid out over the past few years.

Williams also indicates in this interview he was told that Obama was instructed to throw the first debate.

"Paulbots, Vote for Romney or ELSE!"

DEBATES: You are being deceived 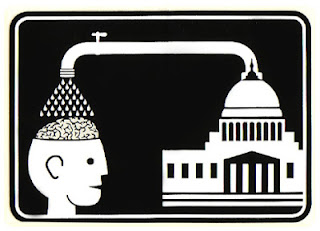 I know those of you reading this post want nothing but the best for America.  So I ask.  Have you stopped to think about how you are manipulated by the choices presented to you for POTUS by the mainstream media and the debate commission?

The people at the top who are manipulating you, don't want you to have fair choices or they would have treated Ron Paul as well as they treated Mitt Romney.   Instead they create the choices that are presented to you so that no matter who is chosen, their interests are served.

Everyone is paying attention to the POTUS race, but very few Americans can tell you the name of their city councilor, their state rep, their state senator, or even their Congressman.   That is by design because you have the most influence over government at the local level, not the top level.  But nevertheless, Americans in record numbers will tune into the big national fake left vs. right debate fight on their televisions.

I read an article today published by the Economic Collapse which posed 28 questions the media should be asking, but isn't.    One question in particular stood out for me and it is telling of cleverly what you think is being controlled by the media, who by the way, doesn't work for you.

Question 14:
How in the world can you have a debate about the economy that lasts for an hour and a half and never even mention Ben Bernanke, the Federal Reserve or quantitative easing?

The Political System in the US Has Collapsed - Paul Craig Roberts

This explains why many independents are shifting support to Gary Johnson for President.

President Barack Obama Promises to Label GMOs, but hired their execs instead

As you know, Monsanto is behind GMO food and is dumping millions into the anti-labeling effort which opposes Proposition 37 in California which will be decided by California voters in November's election.

Did you know after Obama made the promise to label GMO foods as part of his campaign in 2008, then upon being elected he promptly appointed several key Monsanto executives in important USDA and FDA positions?

Gary Johnson served as a popular governor of New Mexico from 1995 to 2003.  He's easily the best qualified candidate to serve as a president.

You can meet him tomorrow night, Thursday October 4th at a small party at Rupert For Governor headquarters downtown on market street.

Here are the details:
http://lpin.org/events/gary-johnson-after-party/

GOP treachery is causing rebellion and exodus of liberty coalitions

A Reminder to Mitt Romney From Ron Paul Supporters 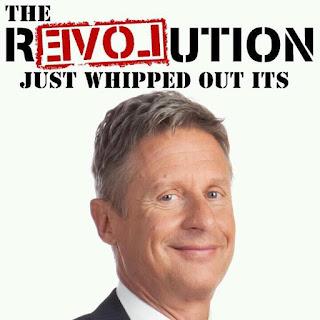 So, the GOP thought it could cheat Ron Paul and his supporters and then expect them to vote for their vetted puppet anyway?

Could it be that the Ron Paul kooks are acutely aware the neither the Republican or Democrat party provides a path to put our nation on the rails as a just and peaceful country who practices what she promises about Liberty?

Regardless, the activists supporting Ron Paul are leaving the GOP in droves and are moving support to Libertarian Gary Johnson, who served as New Mexico's popular governor from 1995 to 2003.

Right now the game changer looks like it is starting with Ohio, an important swing state.  Recent polling shows Johnson at 7% to 10%, which is enough to throw the election back to President Obama.

The presidential debate commission refuses to put Johnson on the stage, so Governor Johnson's campaign filed suit.  Libertarians know the rule of law and the suit is not surprising.

Maybe Honey Boo Boo will get higher ratings on debate night too!  Your time might be better spent watching redneckorating than the fake wrestling of two puppets controlled by the same puppeteers.

What is Mittens going to do?  Are the boys going to false flag us into WWIII or is Liberty, Peace and Prosperity going to to have a voice?

Collectively, we can create any future we want.  Remember that beautiful reality when you vote.