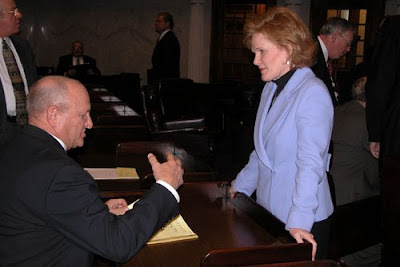 Senator Lubbers' (Indiana District 7) gave this bitter and unfeeling reply to the letter below she received from from a pro-repeal taxpayer who lost friends to suicide over property taxes:
Re: PROPERTY TAX ELIMINATION
Date: 12/5/2007 9:34:57 A.M. Eastern Standard Time
From:SENLUB
To:Jhayshoh

Your grief and anger are understandable but your need to place blame is pretty harsh.

My name is Jeff H,

In 2003, my best friend, of nearly twenty years, had reached a very low point in his life. He had been laid-off from his employment, and fallen into the trap of an endless cycle of trying to regain his footing. I was among many who tried to keep him bolstered. I; as it turned out was the last one to speak with him, some six hours before he took his own life. His last words to me were: “Just when I thought my life could get better, these bastards say they are going to take my house away”. I boarded the first flight home that I could find; hoping that I could help him find a solution…The body wasn't even cold yet, when his own father found him. That blood, and the tortured look in his father’s eyes, ARE on the hands, and heads, of every one of you in those chambers.

That is only one of three such cases for me, from that year. I have forced myself to be insulated from the many recent, too familiar, events. When others tell me of similar events, I question the humanity of those capable of ignoring their own involvement--meaning you. You, by your own laziness, inaction and indifference, are guilty of murder!

Anyone in those chambers; the chambers across the hall, or the office below you, who does not believe their political lives to be in the balance, is fooling themselves. When the horrifyingly inevitable does happen again, there will be such a pile of dogs fighting over the bones of your careers; none will be rewarded without a mortal wound to their political future. When a "victor" emerges, it will be next November. Many, if not all, of you will then know how bleak and cold you have made that month become to us.

I have been assured from conversations with people across the state, that campaigning for re-election by anyone opposed to the repeal of property tax is a fool's errand at this point. You can waste our time believing that this will not be important prior to next year. You can bluster upon the contrived points of your own arrogance and apathy to the lives of people in this state. You can “Win” your battle to preserve a corrupt, unjust, inaccurate and antiquated system… Sure, it’s a battle you might win, but I will refer you to the concept of a "Pyrrhic Victory". Ask Mayor incumbent Peterson for an illustration, if you must.

Or, you can attempt to redeem yourselves--Be a Statesman, for once in your career. The quotation which keeps re-emerging to me is this: “The most dangerous person in the world is the person who has nothing left to lose”.
Keep up your harvesting without planting. Keep stealing the bondsman’s share of bread, and then beat him because he will not work harder for you. With so many “Rainmakers” calling up so many storms, and so much “Light of Day” beginning to show on the state sponsored slavery which is property tax, I find it puzzling to see so many of you stubbornly re-planting the seeds for your crop of whirlwinds.


She and her cohorts have had four years to do something...but they haven't.

Let's think of the young families, elderly and the common person who have been harmed by the INACTION of the "government" of this state...

I think it may be time to be a bit more than harsh.

All the legislators in this government are in denial of the harm they do to the citizens regarding excessive property taxes. We haven't seen anything yet, when the feeders of this system keep coming out in full force to defend their illegal confiscation and misuse of our property tax money. Be prepared to keep up the pressure. They have caused personal economic disasters!

This letter is an absolute masterpiece. It should be sent to every state legislator who's jacking around with this issue, and to the governor as well... and everywhere else it can be seen. Any trace of "the benefit of the doubt" I was willing to afford Sen. Lubbers is long gone.

At the risk of sounding a bit doubtful, how do we know this message came from Senator Lubbers?

Clearly, there's no way to know because, at least as this message is posted, her e-mail address isn't a complete address.

AR:
I stake my integrity as a blog editor on the fact that this indeed a genuine email response from Senator Lubbers.

I made the decision to publish the letter after the author (who I know well) forwarded his letter with the Senator's response.

The the honor of my source is without question in my mind.

You will forgive me, I hope, that I know neither you nor your source for that letter.

Was that the response the entire response, or just a portion?

As well, the e-mail address for Senator Lubbers doesn't appear to be correct (there's no @domain information)- was that edited to hide the actual e-mail address?

ANYONE who knows someone who has lost someone or been affected by property taxes needs to tell their stories (anonymity is appropriate out of respect for family members or other reasons).

Legislators can dismiss the so-called wing-nuts who protest, but if citizens bombard them with letters, blog-posts with stories and pictures of real people who are suffering or who have died over this issue, we might be able to persuade?

The property tax crisis in Indiana may ultimately distill down to a "numbers game". But we can make it IMPOSSIBLE for elected officials who drone on in meetings, hearings, & press conferences, to ignore the human casualties from their ignorance and inaction.

We must abolish this corrupt, expensive, subjective, system that robs individuals of their dignity as well as their homes.

bLubbers domain and email addy is"SENLUB@aol.com.
I'm at AOL, and anyone else's addy on AOL comes without a file extention.

I have the bLubbers email (ORIGINAL) in my file, and fwd'd to others.

Get your head out from under Theresa's skirt, before you start pointing fingers at others!

Angry Republican...I'm not hard to get to know or to meet. Come out sometime and introduce yourself. Then hopefully, you will feel better about my credibility.

A lot of us will be going to the Libertarian holiday party on December 17th. You are most welcome to join in regardless of party.

As a card carrying Libertarian I crossed party lines in November and did a little time down at GOP headquarters to help Ballard. So I hope you get the feeling that HFFT is decidedly non-partisan.

Also, I noticed you posted on Advance Indiana that you are jewish. Our media spokesperson, Max Katz, is too. Do you know him by chance? His family is well known in the jewish community.

I wasn't trying to be disrespectful. However, I've heard more than one person (and rightfully so) complain over at TDW about posting rumor, not fact. I was only trying to ascertain whether or not the e-mail that was posted was indeed legitimate. It seemed odd. As I don't have AOL, I have no way to know that the username without a domain is AOL. I wasn't attempting to point fingers at anyone.

In the future, perhaps a bit of kindness might go a long way.

A little kindness can go a long way?

I have been riding this pony since 1998. When Frank "Gov. Floyd the Barber" O'Bannon, said that: "The increases in property taxes, will actually be a decrease. As the increases were not nearly so large as we had expected. So; your 300% increase in Property Taxes, was actually a 75% decrease, in comparison to 1998 rates". WHAT? At least it's warm where he is tonight.

That, is what caused this: http://hoosiersforfairtaxation.blogspot.com/2007/12/compassionless-senator-lubbers-offers.html And, that story doesn't even take up, where I have left off.

Yes, I have many dogs in this fight...

Thanks for the compliments but, I don't deserve them. Only those passed are Heroes...I have one HELL OF A FIGHT left in me.

There are many in this fight for freedom and ownership of what is ours that are willing to lay down their life for this cause. Don't ever doubt their dedication to win.

Our government is largely corrupt and out of control. We are taking back what is ours.

Sell your soul to the machine if you wish. The patriots will fight for freedom to the death if necessary.

And none of you have seen "harsh"
yet. Revolution is here and the patriot network grows larger by the hour.