HFFT has history of endorsing candidates from all parties 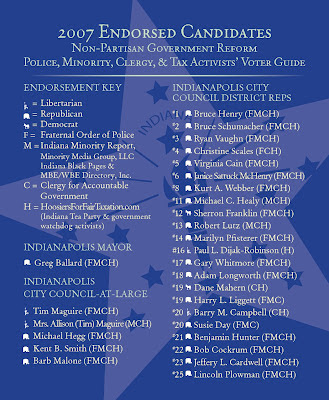 click image to enlarge
The Indiana Voters' League published our candidate endorsements in October 2007. It is clear HFFT endorsed candidates from all three parties, not just the Libertarians. In fact, HFFT helped bring a republican controlled council and a republican mayor to Indianapolis.

When the Libertarian is the best candidate, the Libertarian will be endorsed. When there is a better candidate in another party, we will endorse that candidate. For instance, democrat Abu Henderson is endorsed for state representative in Bill Crawford's district.

It is shameful that so many of you who said in this last race that the Libertarian was the best candidate, but didn't vote for him.

When did HFFT use a litmus test for preferential voting as a requirement for blogging fair taxation entries? This is ridiculous. What's next, who's sleeping in the bedroom or the color of your underware? Sounds like a witchhunt. Why not just itemize your requirements and be done with it.

Anonymous...the moment you grow some big enough balls to sign your name to your opinion, it will be addressed. Got that?

I don't play with cowards.

no wonder you have no applicants. take a chill pill and have a blessed day.