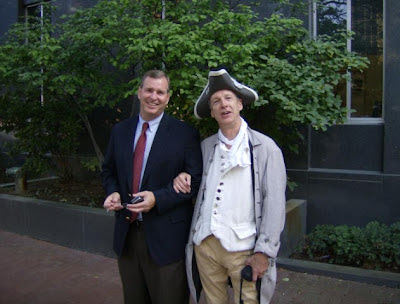 "The People's Mayor" & Activist Paul Wheeler
City Council Protest - Summer 2007
Our mayor elect, Greg Ballard, spoke last night at a Republican holiday party attended by all kinds of people who laughed at him last summer. Many there had plenty of cash to support their party's candidate but refused to believe in him or help him. Some people at the Republican holiday party gave their money to his opponent, Bart Peterson believing that money wins elections. They were more interested in making sure they were in solid standing with Peterson. They wanted make sure they were in favor with the man who would continue to deliever status quo government. Most importantly they wanted to reap the financial rewards financed by your tax dollars that would come with supporting Peterson.

Tom John, chairman of the Republican party said two weeks before the election that Ballard would not win, and that he was going to focus his energy on re-gaining the city council. Melyssa noticed Tom John at republican headquarters did not so much as acknowledge the volunteer staff of commoners on the phones the weekend before the election . She also saw that Tom John did not thank them for their work. There was even a 12 year old girl named Caroline helping make calls. Not a word of thanks was spoken to her by the party chair. That is shameful and no way to encourage our youth's activism in politics.

Missing from the party were the activists and soldiers, the common people, who worked the streets, gave what money they could from their budgets, and had no agenda except to promote a mayor who promised to support property tax repeal, create government transparency, and to put IMPD back under the mayor's office.

During his speech last night, Mayor elect Greg Ballard stated he did not run a negative campaign. That is 100% true. However, an effective week-by-week negative campaign was indeed organized, financed, and run. The dirty work of the negative campaign against Bart Peterson was done by rogue groups of activists, bloggers, you tube documenters, and street soldiers who took the personal hits and ridicule to do it for him. This was a critical strategy to prevent our pristine mayor's hands from being soiled with the dirty business of negative campaigning.

We wonder if the people at last night's party care that one of our activists was FIRED from his job for his activism and support of Ballard. Or if they care that Melyssa's employer was contacted by the opposition in an attempt to cause her to lose her job. We wonder if they care that The People took real risks to be out in front doing the dirty work that helped Ballard get elected.
It's time that our new mayor makes sure that the channels of communication are immediately open to The People, so that we are assured he is definitely working on our behalf and we can see his work in progress. Fancy parties surrounded by the very people in his own party who refused to support him, do not give us comfort!

When we see Ballard place more people around him that cannot be bought or sold, who have honor, and who have no agenda except small, accountable government, we will feel confident and be able to breathe easy.

We are not delusional. We know that our city's government and finances are in a horrible mess. We know the task ahead for "The People's Mayor" is difficult. We want him to know that we will be loyal if he is loyal to The People. We want him to know that we'll bring volunteers with great skills to help our city and we'll bring people with no agenda and great credentials to work in city government simply because they love our city and want to save her. We will continue to give of our resources to the betterment of our city, just like we did last summer.

We are good and honorable citizens.

Greg Ballard has everything he needs to not only lead our city, but lead our state and ultimately the reform of our country. In our opinion the ultimate service to our country is ahead of him; the leadership of our great city, state and national reform.

We believe in Greg Ballard and know he has the Courage to lead our fight against unaccountable, elitist, tax and spend government. We want him to know that he has legions of troops to help him get it done, but we need our place at the table and an open channel of communication.

Good Luck. I hope your wishes are fulfilled. I can tell you that I was one of those who gave a not insignificant donation to Mr. Ballard. Not so much as a thank you from them. It is the most I have ever given a candidate, and the first time there was no acknowledgement. I only mention it here because for someone who was running on the platform of change in politics, not owing to the political mainstream, he has walked quickly away from the folks who supported him. Disappointing.

I am sorry to hear that. It is most important to always thank people along the way, tell them they are special, give them work to do and platforms upon which they can become more than they were.

I do believe that Ballard gets this, I just think he started to lose his way because of the opportunistic filthy slimeballs that stepped in the moment he won (and not a second before).

I'm very much looking forward to reviewing Mayor-Elect Ballard's final campaign finance report. His first report showed who was in and who was not in. I was in for a substantial contribution just as the first poster and I too never so much as received any type of thank you. In addition to that I can say that there were no less than 1600 votes I personally gathered up for Ballard on the near east side.
If Ballard can't organize himself enough to thank his own supporters then don't count on him working for you in the Mayor's office either.
Sometimes what you wish for and what you get are not one in the same.

OK, so let me get this straight. You are wanting to dictate who Ballard can associate with and where he can go. So he's not allowed to go to his own party's party because people were there that didn't support him?? If that's your criteria, there are many places in the city he will soon run that you would not allow him to go. He cannot run a city that way. Or are you just sour grapes because you weren't invited? Sounds like he's only allowed to socialize and work with people who provided him money during his campaign. That's extremely short-sighted. I agree that all who supported him want to continue to work for the good of the city and I believe Ballard wants that for the people as well. However, at this point, he needs to gather knowledge from people who have experience running the city. This excludes most of the grassroots people that supported him. Not because he doesn't want them there, but b/c they don't have the expertise he needs right now. He will not forget those who supported him, believe me. I keep reading that Ballard's not providing positions to those that financially supported him. That's exactly what you all criticized Bart for during the whole election. You can't have it both ways.

Has anyone expressed these concerns directly to Mr. Ballard? I know of some of the "little people" who DID receive notes of appreciation -- perhaps some of us should offer our services to help write thank-you notes! I appreciate the concern, but I'm willing to give him a little more time to get his feet on the ground before I start complaining.

anon 4:19
Please don't accept my comments about a "thank you" as the desire for some reward. Far from it. I am not qualified to do other than provide some financial support. The point I am making is elementary. We learned at an early age to reach out, to acknowledge, to simply say, "thank you". When this does not happen during a time of supposed change, then it simply looks like more of the same. I don't need, nor do I want, any invitations. I want a Mayor who will walk as he talked.
One who will remember that he will be in office because people, not machines, backed him, when the machines turned their collective back to him. Small actions speak volumes. Disappointing.